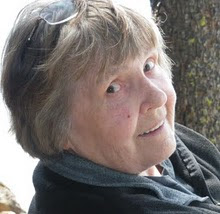 Roots'n'Leaves
Joan Hill
of
Ashland, Oregan
Recently, I had the pleasure of stopping by Roots'n'Leaves and absolutely "Falling In Love" with one of her stories.  Before I even realized it I had been swept away to some place and felt as though I had been sitting beside her all along.
Her post titled:  "Sentimental Sunday: A Love Story at Burger King" is truly a love story that we don't hear about or see anymore.  To know that this "Love" still exsist after all these years, after all "BLING" is gone is truly a gift.  While reading her story, I could honestly see the couple as if they were standing if front of me.  When I reached the end, I so wanted it to continue and to know what happened next.
Please stop by and read Joan's post about a "Love Story at Burger King" and while your there stroll around and read some of her other stories.  I promise you wont be disappointed.
"Life is not measured by the number of breath's we take, but instead;
by the number of moments that take our breath away"
Posted by Robin at Thursday, February 25, 2010 1 comment:

TREASURE CHEST THURSDAY: "The Love of My Life" 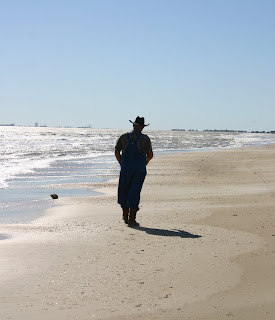 Galveston, TX
February 2010
In June of 2007 I happened to cross paths with a "Cowboy" by the name of Ronnie Walker.  In talking to him one could quickly tell he was unlike any other you would ever met.  For his age, he was far beyond his years.  Yet, I approached with caution because of past heartbreaks.
It didn't take long for Ronnie to steal my heart.
Ronnie is truly unlike any man I have ever met.  On the outside he is tough, hard, and rough.  However, on the inside there is a softer side that most never see.  His heart is the size of Texas when it comes to children.  While most are telling them to "quiet down", he welcomes the sound of their laughter and play.
When he is not on the road working, his daily routine begins at the "coffee shop" for the daily business meeting.  Thats "Cowboy talk" for "Bullshittin'" with the old cowboys and farmers.
Ronnie don't do or say what everyone else does.  He does what he wants and there are only two things you can do..... "Love him", or "NOT."  It is the small things in life that he does that most seem to over look and never worry about.  I would never admit it to him, but he is usually right on "Most" things.
He don't wine and dine with dimonds and fancy stuff, but I have more "MEMORIES" in three years, than most have in a "Life Time."
This man most call "WALKER" has walked into my life without so much as a warning and stole my heart.  I do not remember what life was like without him, but I know that I never want to know another day without him in it.
"Thank you babe, for being there"
I love you with all my heart
"Your Girl"
Posted by Robin at Thursday, February 25, 2010 4 comments: 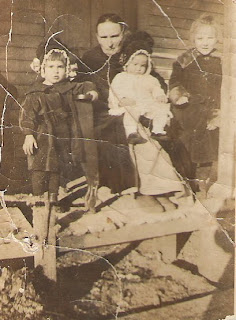 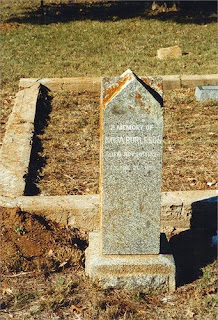 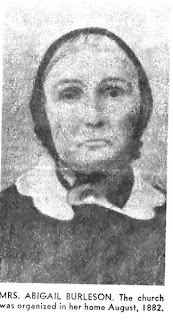 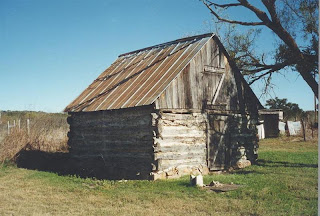 In 1882 Abigail and Cummings opened their home in Valley Springs TX to the First Primative Baptist Church in the area.
All photos were orginally provided to me by Donna Chapman, Photo of Abigails Cabin was provided by Greg.
All Rights Reserved 2010 by "Robin Inge aka Wolfhuntress2002"
Posted by Robin at Monday, February 22, 2010 5 comments:

Madness Monday: "Who Are You" 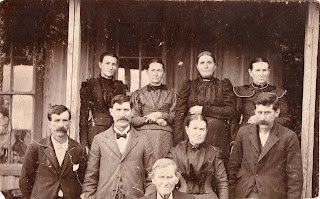 This photo is the reason I started my search for who I am so many years ago.  While visiting my great-grandfather, he told me to go through his old photos in the drawer in the bedroom and take what I wanted.  As a little girl, I had always admired this photo and wanted to know who these people are.

As I sat in the middle of the living room floor going through photos and asking who people were I once again decided to ask who these people were.  As my grandfather told me, I wrote on the back of the photo.  (I was young and didn't know better at the time).  The lady on the front row is Amanda Elizabeth Dougan Clark, daughter of Joseph and Nancy Dougan aka my gg grandmother.  I had always planned on naming my little girl after her, but it never worked out that way since I had both boys. 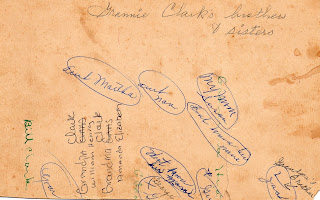 "Grannie Clark's" brother's and sisters
That title was written by my grandmother, Amanda's granddaughter.  The handwritting on the left written in a totally different direction is that of mine as my grandfather began to tell me who people were.  There are two other handwrittings, that which is in green ink, and then the blue ink which is circled.  I have decided that these are actually not Clark Siblings, but instead Goodman siblings.  Amanda's mother Nancy became a widow during the Civil War when her husband died in Arkansas due to diesease.  She later remarried a man by the name of Marcus Goodman and they had several children together.  I have figured out a few of them, but I can not make out the green writting to the right of what says "Bill Clark".  I do not know who the elderly man in the front is either.  I also want to know who wrote:  "My Mom Susan".  I can not find a Susan on the goodman tree and don't know who she is.  Their identification has alluded me all these years.
Who are you?  How old is this photo?  Where was this picture taken?
No one knows, but one day I will figure it all out....
Posted by Robin at Sunday, February 21, 2010 1 comment: 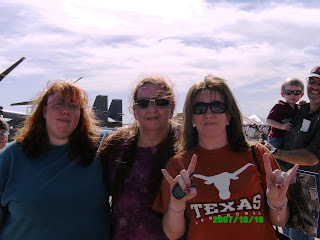 Kristi, Kathyrn and ME
10 October 2007
Sheppard Airforce Base Air show
Wichita Falls, Texas
To most people a photo with their mom is not that big of a deal.
However, to me it is!
You see, up until this particular week, I had not seen my mom in 33 years.  You heard me correctly.  When I was a little girl, her and my father divorced when I was 4.  I had not spoken to or seen her since.
In Feb. of 2007 I had just moved to Wichita Falls and happened to be at lunch and my grandmother called.  She informed me that my dad had brought us a letter from our cousin Rene.  In the letter it told my father that she was looking for Robin and Krisit and if she didn't have the right person, to please forgive her.  If so, then she was hopping to contact us and if he didn't want to give us the letter she would understand.  Well, obviously he gave us the letter.
At first I was in shock and didn't know what to say, think or feel.
When I went home that night, I sat down and wrote her a letter back and it wasn't very nice.  It stayed in the door of my car for months.  In late March, early April, I sat down to write another letter.  The next morning I gave it to my ex-mother in law and asked her to mail it for me.  Sometime in mid April I received a phone call shortly after I got home from Rene(my cousin).  We talked for a while that night and hung up.  The next night, we talked again and I also received a call from my mom.  I knew instantly who it was without her even telling me.
In October of 2007, they all came to Texas to visit.  When I first saw her I was actually numb.  I was not sure how to feel or what to say.  I think for the first few days I actually walked around like a zombie.  I can't say that the visit was perfect and had a totally happy ending.  It didn't!  However, I can say that at the end of the visit I no longer had questions or regret.  It has taken the last 3 years for us to become friends.  However, I have not regrets nor hard feelings.  I can honestly say that when I leave this world that I am ok with it and no matter what I wont't leave wondering.....
Posted by Robin at Saturday, February 20, 2010 1 comment:

This work is licensed under a Creative Commons Attribution-Noncommercial-Share Alike 3.0 United States License. Copyright 2010 ALL PHOTOS unless otherwise stated are the property of Wolfhuntress 2002 aka Robin Inge and can not be used unless you have prior authorization and link back to this site.

Robin
My greatest accomplishment is being a MOM! After that nothing is really important if you take that away.... However, in the quiet moments, before the roosters crow, and the sun begins to peek above the trees, I love to sit and scrapbook and work on my family heritage. Since discovering Scrapbooking two years ago, I have also rediscovered my camera.... looking through the lens at the world gives new meaning and light to everything I see. Everything is a moment to capture and create. When spending time with family and friends, I love to spend time outdoors, riding horses, playing in the mud, hunting and fishing and doing whatever our hearts desire...the smallest of moments are my greates joys. "Life is not measured by the number of breaths we take, but instead by the number of moments that take our breath away"

presented to me by: GINISOLOGY

My Network... stop by and say hello!